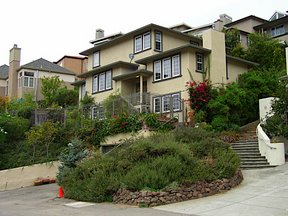 Our Danville office has been selling package homes to the owner-builder buyer since 1976 and has become the “The Owner Builder Leader in the Western United States”. Some of our clients say that we have a “passion for this business”.

We learned the hard way that buyers are not impressed until you earn their respect. It is our goal to help with everyone’s building needs. From a small 200 square foot garage to as large as 22,000 square feet 14-unit apartment, we are here to help you.

Dennis Foster started his marketing and sales career in 1968 after graduating from California State University with a degree in Mass Communication. After graduation, his work expertise was in sales and marketing and was employed as the Advertising Director for the Montclarion Newspaper in the Oakland hills. Seven years later, he moved to another newspaper and realized this direction was not filling his passion.

Dennis was going through the classified ads and found an advertisement with the heading “Housing and Real Estates Sales”. He made a call and found his place. From 1976 until December 1980, Dennis worked for Capp Homes. During these years he earned many sales awards. In the final year of Capp Homes, Dennis obtained the prestigious honor of “Top Sales Person”. Capp Homes was one of the largest packaged home businesses in United States. When the housing market in the early 80’s became very volatile, Capp Home’s, Curtis Homes and Miles Homes, three of the largest packaged homes companies along with several other major competitors, left the industry and closed their doors never to reopen. Capp Homes manufacturing location in California was in the town of Elk Grove. Another packaged home company called Pacific Modern Homes, Inc. (PMHI), established in 1968, is also located in Elk Grove, CA as well.

In December of 1982, Dennis moved into a new house and was promised a new office in Dublin California, with Capp Homes. However, the day he moved into his new house, Capp Homes closed down. Dennis quickly had a meeting with Pacific Modern Homes and soon California Pre-Cut Homes (CPH) was created. The owners of Pacific Modern Homes got together with Dennis and several of the other top producers of Capp Homes. In less than one year, Dennis the only one left working with PMHI and continuing in the package home industry.

Dennis worked throughout the hardships of the 80’s housing market and within no time was receiving annual sales awards. It took him several years to earn the rank of top producer “Dealer of the Year” for Pacific Modern Homes, Inc. Dennis operated a sole proprietorship competing with other dealerships employing several sales people. It made the position “Dealer of the Year” most difficult to obtain. Since 1985, Dennis has been “Dealer of the Year” 16 out of 25 years. He has been second runner up 10 times, and 22 out of 23 years with PMHI Dennis has become a top producer of their product. CPH has been the OWNER-BUILDER LEADER IN THE WESTERN UNITED STATES SINCE 1976.

Dennis’ son, Matt, now works with him. Matt grew up in Danville and graduated from Monte Vista High School. He was very active in the local community, playing sports, doing community service, cub scouts, and Boy Scouts, receiving the rank of Eagle Scout in 1995. Matt worked various jobs until he went to school in San Diego. He graduated from Mesa Junior College in San Diego with a General Education degree and a certificate in drafting. At the same time, he was working for a high-end catering company. He first started working parties and then moved into the office. He was in charge of their daily lunch deliveries, working side-by-side with the owners in their office, and at all the parties.

Matt started to work for Calif. Pre-Cut Homes on July 1, 2002. In 2004, Matt helped Dennis obtain his highest volume of sale’s with PMHI. The two of them sold almost a Million Dollars in product. Within 18 months, Matt has taken on all the delivery responsibilities for CPH. Over the last seven years Matt has almost taken over full charge of the business. Together, they are a strong father & son team.

Packaged homes are not a new concept

Pacific Homes, was founded in 1906 in Los Angeles, California....but is not related to PMHI. Sears, Roebuck & Co. were the leaders in America from 1908 to 1940. Many of these early "kit homes" are now historical landmarks all across America.

In June of 1968, Pacific Modules, Inc. (PMI) was incorporated. Along with a sister company, Pacific Buildings, Inc. (PBI) in Marks, MS, both PMI and PBI were involved in building houses utilizing their packages in their respective areas as General Contractors.

In October 1973, the corporate name was changed to Pacific Modern Homes, Inc. By 1980, PMHI ceased being a General Contractor and concentrated on only being a manufacturer and supplier to general contractors, developers and owner-builders through a network of representatives and dealers.

In 1990, PMHI began exporting packages. The Pacific Building System has been used in projects in Belarus, Russia, Kazakhstan, Ukraine, France, Mexico, Korea, Japan, Lebanon, and China. We also class shipments to Alaska and Hawaii as "export" as they involve shipment by containers. In addition to supplying home building materials, PMHI has supplied equipment for local production of wall panels and roof trusses, construction supervision, and site planning.

Want to learn more about PMHI and how to build a new home, garage, or barn in California, Hawaii, Nevada, Oregon, or Washington? Contact your local PMHI representative. All other areas, worldwide, except in Japan or Lebanon, use our Web Order Homes program.